When the Street speaks !

Four Belgian social street workers testify about their experiences and the wealth of exchanges during the Forum Words from the Street which was held in Brussels in October 2021.

“I participated all week in the Forum Words from the Street 2021. It was an extremely rewarding experience for me. I participated in many workshops, both on concrete tools of street work (workshop on street chess etc.) and on reflections on the meaning of our practices and their usefulness in social work in general. For me one of the great strengths of this forum was the diversity of workers present. This international forum allowed me to meet street workers from all over the world and to exchange about our practices, our target group, our realities.

This really reinforced the idea that social street work is an essential pillar of social work. The only regret we can have is that this forum only takes place every 10 years.” 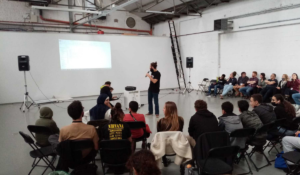 “It was the first time for me that I participated in the International Forum of Social Street Workers.

Despite the challenges of organizing due to COVID, we were able, with a year lag, to organize this large-scale event that brings together so many people. It was an incredible opportunity to exchange on the different situations and practices implemented within associations around the world.

It also provided an opportunity to expand my network and maintain contact with youth workers for youth exchange projects and strategic partnerships in the longer term. During the week I also animated an afternoon of meetings between young Brussels residents and social street workers. It was an incredible moment filled with curiosity from both groups. It was important to be able to set up a space in which young people could present their projects, debate, and express themselves. It was also important to make their voices heard in the European Commission and they got a lot of pride out of it (and a little boredom, I must admit, because it was a long time) » 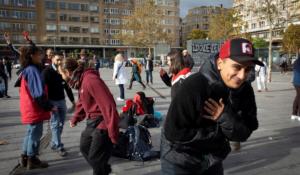 “When I heard about the Forum Words from the Street project, I did everything to participate. Seeing street work and interacting with street workers from around the world is an experience not to be missed for any other project. Indeed, I was able to reflect on the problems faced by street workers and together we were able to give ourselves some ideas and ways to improve our work. This project also allowed me to improve my relations with the different street workers in Brussels and to get to know workers from all over the world. Finally, from time to time I wanted to exchange with English-speaking workers, but I didn’t dare because of my low level of English » 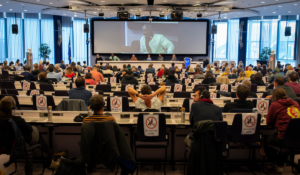 « Participating in the Forum Words from the Street as a member of the organizing team was a very rich experience both from a professional and personal point of view. In addition, the conditions we had to face during the months preceding the event, led us to uncertainty and permanent change. This, when we were finally able to welcome the people who came to Brussels from all over Belgium, Europe and the world, gave us an even greater satisfaction, like a feeling of having overcome an imposing and omnipresent obstacle.

During the week, I oversaw the ‘political’ part of the Forum. Concretely, to form a group that would draft recommendations to be read to the European Commission based on the contents of the participatory workshops proposed by the participants. This ‘convergence’ work was a real challenge: not much time was available, work was done in three languages and with an ambitious and new objective for me and most of the participants. Despite the difficulties, it was a pleasure to meet so many people passionate about the ‘political’ dimension of our work, and seeing them confront each other, exchange on topics that emerged during the work of the Open Forum. It really moved me.

Professionally it was a great learning opportunity for me. Indeed, I think I have taken up the challenge of making collective intelligence work for a rather ‘binding’ objective about ten synthetic recommendations. I think I’ve learned some important lessons, particularly in terms of clarity of explanation and time management.

From a personal point of view, the Forum was a mine of precious encounters and a week so intense that the border between day and night was almost intangible! The gratification of seeing on the faces of the participants and the smile of those who feel welcomed, has allowed the box of good memories and satisfaction to be well filled! »